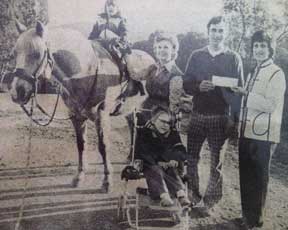 It all began in October, 1978 when a group of Los Altos Hills residents—led by Nancy Couperus—launched a non-profit program called Westwind Riding Institute. The program’s mission was to help children ages 5–19 with physical disabilities to gain balance, coordination, and confidence while on horseback. The program also proved vital in the effort to gain community support to save the historic Westwind Barn.

The class started small, with only three borrowed horses, but it grew over the years. Nancy Couperus recalls, “The first year was rocky. Some of our people trailered horses over steep winding roads from Half Moon Bay.” It did not take long to see that the only way to make the program work was to have dedicated WRI horses located on the facility.

In 1978, the first mount to permanently join the WRI program was Domino, a 30-year-old Shetland pony donated by Paul Brown of Woodside. Domino was a gentle and intelligent little pony, loved by children of all ages. At the ripe age of 37, Domino became our little celebrity when he celebrated his birthday on the KPIX-TV show Mac and Mutley. Two other horses soon joined the WRI family. Tevi (17 years old) and Beau (30 years old) were donated by Nancy and Jitze Couperus.

The WRI barn with adjacent paddocks was built in 1980. It could accommodate up to eight horses. The barn was funded by several local organizations. 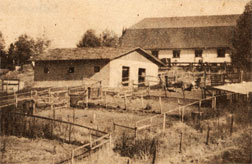 Jim Forderer was the principal instructor for nearly 10 years. He was an accomplished equestrian and had a degree in recreational therapy from San Jose State. As a single parent of several adopted special-needs children, Jim was personally attracted to the simple idea that therapy can be fun for children on the back of a horse.

“For a child confined by her earthbound wheelchair, the view from atop a horse is a new dimension.”

Since these early days, hundreds of riders, thousands of volunteers, and many talented instructors have come together and shared the enthusiasm and benefits that Westwind Riding Institute has to offer. 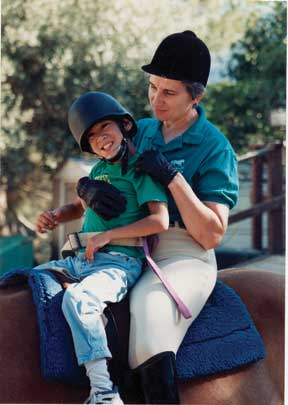